Vin # JH2DA0107BS116307
Honda’s assault on the world motorcycle market did not begin with 2-wheeled battle cruisers. Rather, they said that we could “meet the nicest people on a Honda”. And they were right. A friend who helped establish American Honda told me that in an early meeting, the Honda folks said that, initially, they wanted to sell about 2000 bikes. He responded, “per year”? They answered, “no, per week”.

And the machine that Honda started with was named the Cub, a peppy, safe-looking, step-through model in red and white that had electric start, was oil leak free, low maintenance, and guaranteed to put a smile on the faces of newbie riders. Through the years, the several models of the Honda Cub have sold untold millions throughout the world and , in fact, are still being sold. There are updated models at your local Honda dealer right now.

This 1981 C70 Passport version has but 656 original miles and is in original unrestored condition. The little 72cc horizontal single engine pumps out 5HP, enough to get you to 50 mph on a flat paved road, on a windless day. To make driving simple, it has a 3 speed semi-automatic transmission. To make driving interesting, the brakes are marginal. Ignition is by flywheel magneto but a kick starter is available should your battery go flat. Seventeen inch wheels give it a big bike feel. And while they’ve been ridden everywhere in the world, in all kinds of weather, on all types of terrain, the Cub is happiest tooling along a paved road.

The plastic leg guards offer decent weather protection and parts availability is great. Routine maintenance is simple and the bike is easy to work on, though you won’t have to. But should you like to dig into the mechanicals, a genuine Honda C70 Workshop Manual is included as is the Owner’s Manual and a wiring diagram. Spares include a complete carburetor, carb rebuilding kits, petcock, air filter, spark plugs, new starter solenoid, points & condenser, and a magneto rebuild kit. Also included is the original re-plated tool kit. The Cub Passport comes with a clear Title. 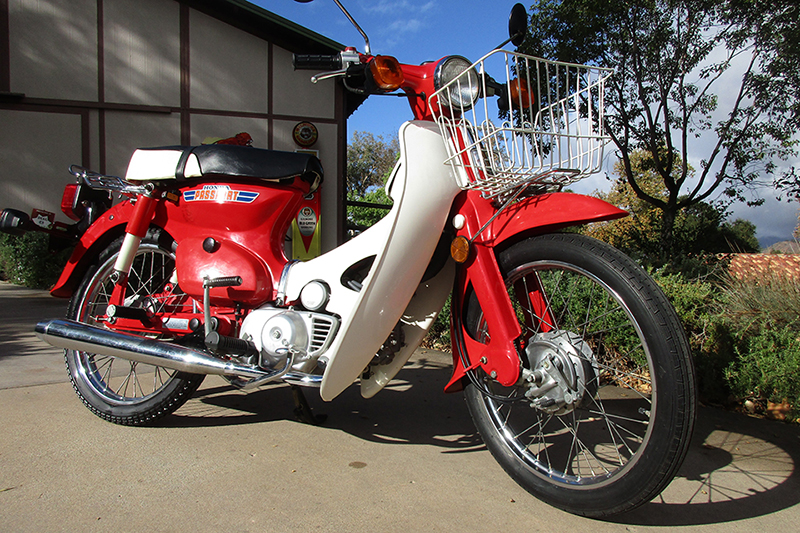