Officine Fonderie Rumi was founded by Donnino Rumi in Bergamo, Italy just prior to the outbreak of WW I . During the 1920s they supplied cast components for textile machinery. At the start of WW II, Rumi became involved in the manufacture of armaments, miniature submarines, and torpedoes. With the War at an end, they looked for other ways of keeping their facilities active and made the decision to diversify into lightweight motorcycles and scooters. The power plant was to be, somewhat unusually, based on a 125cc horizontal 2-stroke twin cylinder design. Peak horsepower was 8.5 at 6500 rpm, good for a 60mph top speed.

By the early 1950s, Rumi was producing a range of Sport, Super Sport and Turismo models. They also made a “Competitzione” model which won the Italian National Championship in 1954. The unusual frame, with the engine as a stressed member, telescopic front forks, and plunger rear suspension was used across all road models. Throughout the 50s, Rumis participated in all of the Italian inter-city road races (e.g. Moto Giro, Milano-Taranto, etc).

On the production front, the range expanded to include 175cc and 200cc variants of the horizontal parallel twin theme. By the early 1960s, production wound down and Rumi went into liquidation, with Donnino Rumi returning to his first love of being an artist and sculptor.

This Rumi, a 125cc Tipo Sport (circa 1958) has undergone a complete nut and bolt restoration. All parts have been re-painted, all chrome re-plated, all alloy polished all hardware re-cad-plated, and rubber parts replaced. It has the correct headlight, tail light, carburetor, air pump, horn, and rubber parts. Included with the bike are the parts catalog, wiring diagram, assorted literature and the book titled, “Moto Rumi – The Complete Story”.

“selling on a bill of sale only” 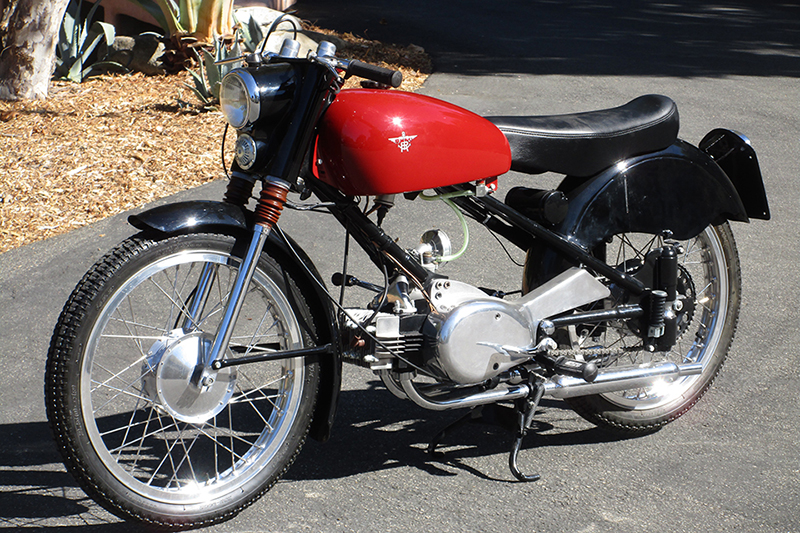