PLEASE NOTE THE DESCRIPTION ON THIS BIKE HAS BEEN UPDATED

VIN # T150VDH03843 (Frame & Engine)
The Triumph Trident came on the scene too late to save the British motorcycle industry. But it can fairly lay claim to being the first British “superbike”. While design work on the new triple began in 1964, production delays caused by financial and industrial relations problems resulted in the first models becoming available in 1968, only just before the more sophisticated Honda CB750 arrived on the scene, a machine which set the motorcycling world off on a completely new tack.

The three cylinder (4-stroke) engine layout was somewhat unusual, being seen only on MV racers and later on the big Laverdas. It had the basic resemblance of a Triumph twin with another cylinder added. But there are advantages to a triple. Its 120 degree crankshaft can be made to run much more smoothly than a vertical twin. It is also narrower than a four. And in Triumph’s case it could be produced more quickly because the techniques and tooling would be similar to those used on the Triumph twins. The machine concept was the brainchild of Managing Director Bert Hopwood and Chief Engineer Doug Hele.

The concept worked, with the first prototype engine running on the test bed in January 1965 producing 59 HP at 8000 rpm from its all alloy engine. The engine proved to be much smoother running than the twin with only a slight increase in weight. Development continued (albeit slowly) focused on reliability, with the first batches headed for the US market in March of 1968.

In 1969, Triumph decided to go racing with the Trident to test the strength of the new engine and to see how the triple handled in competition. Efforts were focused on Formula 750 or Daytona type racing where basically standard specification machines were required but quite extensive modifications were permitted. Thus, the manufacturer could test new solutions to problems, which could later find their way into production. The race bikes put out nearly 80 HP and in 1970 at Daytona reached a speed of 164 MPH, taking 2nd and 3rd place. At the Isle of Man, a racing Trident, nicknamed “Slippery Sam”, won the Production TT for 5 years in a row from 1971-1975. The racing achievements both in Europe and the US are quite remarkable for a relatively newly designed machine.

On the production and sales front, the news wasn’t so good, especially in the critical American market. While performance and reliability were good, potential US buyers were put off by the homely styling of the Trident For some reason, Triumph went to an outside firm, Ogle Design, to style the bike and the resulting “breadbox” tank, slab looking side covers, and fanciful ray gun mufflers were offputting to US buyers. Frankly, it didn’t look like a Triumph. In fact, by 1970, the factory was forced to offer an expensive “beauty kit” that made the bike look acceptably like a 3-cylinder Bonneville.

Over the next few years, additional improvements were made such as disc front brakes and “megaphone” silencers, and finally, in 1972, the T 150V appeared. The biggest change for this model was to a 5-speed transmission, a first for Triumph. This T 150V is a lovely example with only 10,827 miles showing on the clock. Upon inspection, this unit looks to be a very nicely restored example. The carburetors were recently rebuilt, all fluids changed and it has new front brake pads and master cylinder seals. The machine is laced with stainless steel spokes and sparks are provided by a Boyer electronic ignition.

Spares that come with the bike are a new air filter, side cover badges, and fork top nut “decals”. Also included are a Parts Catalog, Workshop Manuals (2), Owners Manuals (2), the “Triumph Trident Super Profile” book by Ivor Davies, and the Mick Duckworth book, “Triumph and BSA Triples”. The bike carries a 1973 Title. 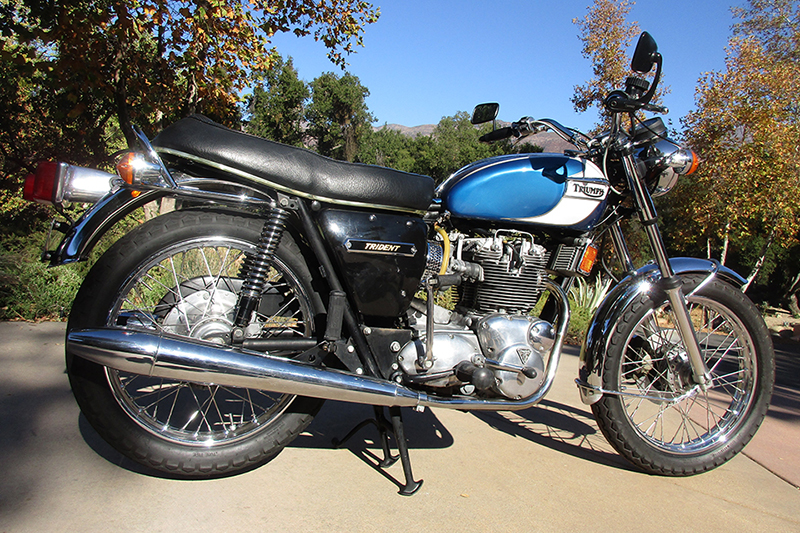